Answer:
Anne was perfect about her opinion on Mr Keesing as an unpredictable teacher. Initially Mr. Keesing punished Anne for her talkative nature. He was indifferent towards Anne's behaviour. However, when he read Anne's essay on the topic 'A Chatterbox', he was impressed by her arguments. He also laughed after reading it and he allowed Anne to talk in the class.

Anne was a Jewish girl alive during WW2. Her full name was Anne Frank. She had no best friend, on whom she could confide. Therefore, she started writing a diary. Today we know that diary as diary of Anne Frank.
A portion of it is also included in class-10 English book First Flight. In her diary Anne talks about many things. We get to know her views about different things and people. She talks of her bonding with her father and grandmother.
In her diary Anne Frank also talks about her teacher. Whose name was Mr. Keesing. She portrays Mr. Keesing as a strict teacher. She says that she was not allowed to talk in the class. However, we know that she was a talkative girl.
However, Anne also says that Mr. Keesing is most unpredictable. Because on one hand he punished Anne for her talkative nature but on the other hand he laughed on her essays. So, we do not see the relation of Anne with Mr. Keesing as a typical student -teacher relationship.
Let's discuss why Anne say that teachers are most unpredictable. And does Mr. Keesing fits to this definition.

Q. Anne says teachers are most unpredictable creatures on earth. Is she right about Mr. Keesing?

Anne Frank was a talkative girl. She talked too much in the class. But, Mr. Keesing did not liked her talking in the class. She calls his a strict teacher.

Anne did not stop talking in the class, even when Mr. Keesing gave her warning many times. Other teacher would have lost his/her temper till now. But, Mr. Keesing only gave her extra homework as a punishment.

However, in the punishment also Mr. Keesing was trying to play a joke on her. He gave her the topic 'A Chatterbox' to write the essay. But she took it as a challenge and wrote a good essay on it. Anne presented good arguments in her favour.

Every time Mr. Keesing gave her essay she wrote convincing arguments on the topic. Which impressed Mr. Keesing. He laughed after reading her essays.

Mr. Keesing even allowed her to talk in the classroom after reading her essays. As he was impressed with her arguments. Thus, Mr. Keesing shows here an unusual behaviour. Hence Anne says teachers are most unpredictable creatures on earth.

Q. Why was Mr Keesing annoyed with Anne? What did he ask her to do?

Answer:
Mr. Keesing was Anne's teacher. He was annoyed with Anne as she talked very much in the class. So, he assigned her extra homework as a punishment. He asked her to write an essay on the subject, ‘A Chatterbox’. But, the imagination of Anne in this essay impressed him.

Q. Do you think Mr Keesing was a strict teacher?

Answer:
However, Mr. Keesing was a strict teacher, he was not rigidly strict. He was a typical traditional teacher who expected discipline and silence in his class while he was teaching. As Anne talked very much in the class, he punished her by asking her to write an essay on ‘A Chatterbox’. When Anne wrote a convincing essay on it and justified her being a chatterbox, Mr. Keesing received it with a good laugh. However, when Anne continued with her talking, he punished her again by asking her to write another essay; this time the topic was ‘An Incorrigible Chatterbox’.
Even then when she kept talking, he asked her to write on the topic ‘Quack Quack Quack, said Mistress Chatterbox'. He was trying to play a joke on Anne. However, when she came up with a brilliant poem, he read this poem in the class, recognising the content in essay and her talent. Therefore, we can not label Mr. Keesing as an entirely strict teacher. He was fun-loving too and he acknowledged the talent.

Q. What made Mr Keesing allow Anne to talk in class?

Answer:
Anne was punished thrice for her talkative nature. But, each time she was able to justify it. On three occasions, as punishments, Anne was given topics to write essays on by Mr. Keesing. However, on each occasion she had impressed her teacher by her arguments. Finally, Mr. Keesing accepted the fact that Anne would always be of talkative nature. Hence, he allowed her to talk in class.
. 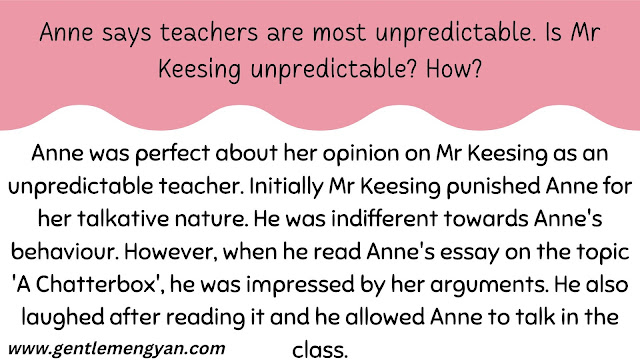