What kind of a mother Ramlal's wife was? Class-10

Que.1 Give the character sketch of Ramlal's wife.

Que.3 What kind of a mother do you think Ramlal's wife was?

Bholi's mother was a typical age-old village woman. She had very backward thinking. She believed that girls should not be sent to school for education, otherwise no one will marry them. She never thought high of Bholi. She called her the 'dumb cow'.

Bholi was never taken care of by her. She was provided with the old worn clothes of her sister. Neither she was bathed daily. Nor was her hair maintained. She was just neglected by her parents.

Her parents only wanted to get rid off her. The only way was the marriage. But as she was not good looking, finding a good groom was difficult. So, they agreed to marry her with Bishamber who was of the same age as Ramlal. This decision was also influenced by Bholi's mother. Who convinced Ramlal to marry her to Bishambar. As she thought no one would marry Bholi anyway.

Answer (Q.3 What kind of a mother Ramlal's wife was?)

Ramlal's wife was not an ideal mother. She was a typical conservative village woman. She was biased towards her good looking children. And she had no affection for her last child Bholi as she was neither good looking nor intelligent.

Ramlal's wife was even of patriarchal mindset. She was of the view that girls should not be sent to school for education. As no one will marry them afterwards. She got her daughters married at an early age.

Ramlal's wife was not a caring mother. She didn't like Bholi for her ugly face. Even Bholi was not bathed regularly. Neither her hairs were maintained nor she wore neat clothes. Ramlal's wife considered Bholi, her own child, a burden. She wanted to get her married to anyone. She and Ramlal accepted the proposal of her marriage to Bishambar, who was of Ramlal's age, in no time. This shows their parenting towards Bholi. 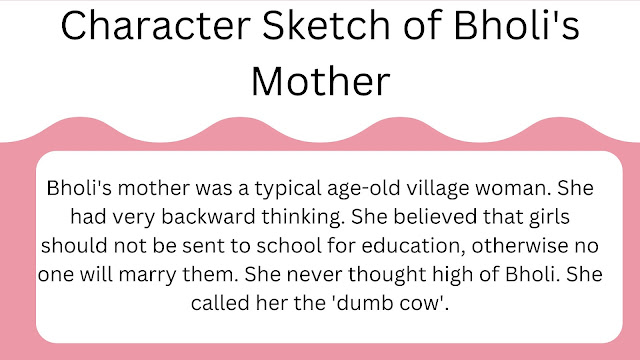