Showing posts with the label MA SEM-1
Show all

'The Rape of the Lock' as a Mock Epic  Table of Contents: 1. Introduction : Alexander Pope 2. The Rape of the Lock as a mock Epic     2.1 The title of the poem     2.2 The invocation     2.3 Parody of athletic game     2.4 heightened language     2.5 Use of epic simile     2.6 Supernatural spirits     2.7 Epic Emotions 3. Similar Articles Introduction : Alexander Pope :- Alexander Pope is the greatest poet of the neo- classical age. This age is marked by extensive use of satire. In  the realm of mock epic Pope enjoys the same position and prestige as Milton enjoys in the  Epic  proper.  Rape of the lock is his finest social satire on England. It is the finest mock epic poem of English Literature. Rape of the lock has won Pope more admirers than any other poem of his. Alexander Pope Profile Born 21 may 1688, London Died 30 may 1744, UK Era Augustan, 18th century Profession Poet, writer, translator Genre Po
Post a Comment
Read more

Paradise Lost as an Epic Poem 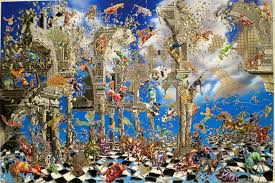 Paradise Lost as an Epic Poem Table of Contents:- 1) Paradise Lost: an Epic Poem. 2) Characteristics of an Epic.     2.1 High Seriousness     2.2 Comprehensiveness     2.3 Ideal of unity     2.4 Choric Quality. 3) Conventions followed in an Epic.     3.1 Invocation to the Muse     3.2 Narrative starting through middle Action     3.3 Abundance of Similes     3.4 A conspicuous contest     3.5 Hazardous Journey. 4) Read More in English Literature. Paradise Lost : an Epic :- 'Epic Poetry' is one of the oldest form of the art that has come down to us in the English literature. An epic is a long narrative poem that is written in a grand scale, about the deeds of the mythical, legendary or real historical warriors and heroes. Epics are grouped into two categories- a) In first category comes the primary or oral epics such as Illiad and Odyssey of Homer. b) second category is of secondary or literary epics. Paradise Lost Created by John Milton
Post a Comment
Read more
More posts